In September, Vladimir Putin gave a speech in the Russian Far East, promising expansive development of the region, including the creation of new cities, and enhanced economic and educational opportunities. The president claimed that development of the Far East will be Russia’s priority, not just for years but for centuries to come. Why such an interest? 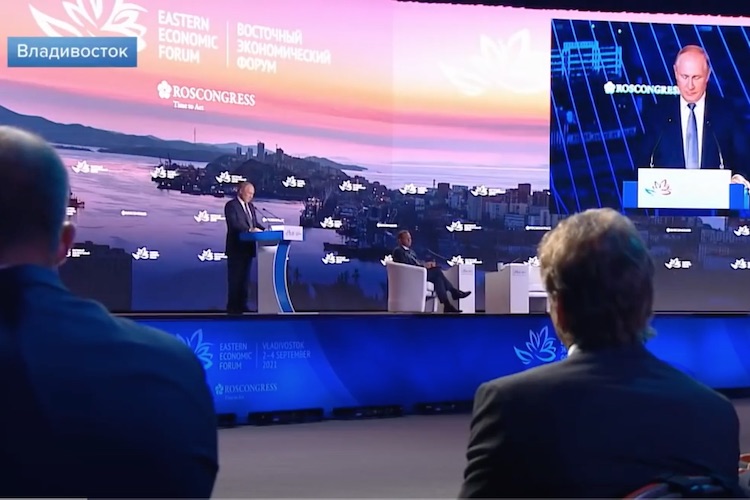 One might assume that this interest is rooted in the Far East’s enormous natural resources, which could be tapped for Russia’s development. Observers with a Eurasianist or Asiaphilic bent could argue that Russia wants to take advantage of its proximity to Asia, given that the latter’s strong global economic and geopolitical standing. Still others could point out that Russia may be paying more attention to the rise of Asian powers, especially China, in light of the decline of the U.S. and the West in general (America’s disastrous withdrawal from Afghanistan is the latest manifestation of this). Finally, this interest could stem from an idea voiced by Mikhail Lomonosov, one of the 18th century’s pioneers of Russian science, who said that “Russia would be enriched by Siberia.”

All of these assumptions are accurate. Still, they do not address the multiplicity of reasons for the Kremlin’s current interest in the Far East. The possibility that the region could secede from Russia has been on Russian leaders’ minds for some time (since the Soviet period), and today such scenarios seem to have grown more viable, as Moscow’s power over the vast country is not as strong as it used to be.

Conquest of the Far East and development of local identity

Russian explorers and conquerors started the eastward expansion early on. By the 17th century, Russians reached the Far East, where they collided with Qing China. After some clashes, Russians realized that China could not be easily subdued in the manner of the great empires of Latin America, and a treaty between China and Russia was clinched—China’s first treaty with Europeans. Trade flourished. By the early 19th century, the Russian empire had solidified its control over the Far East and there were increasing migrations of Russians, mostly farmers, to the region. (In 1867, Russia also sold Alaska to the United States.) At the time, St. Petersburg—capital of the Russian Empire—had no fear of losing the Far East. Moreover, some Russian conservative politicians even considered annexing China, which had become increasingly dysfunctional in the late 19th century, as well as possible expansion into nearby Korea.

It was Russia’s defeat in the Russo-Japanese War (1904–1905), resulting in Japan’s seizure of the Sakhalin, that undermined Russia’s confidence in its grip over the Far East. The clear possibility of Far East independence from Russia emerged by the end of the Civil War (1917–1920), which led to the disintegration of the Russian Empire. At the time, not just the enclaves populated by non-Russians, but even territories with predominantly Russian populations expressed their wish for broader autonomy or even complete independence, while an independent republic actually emerged in the Far East (1920–1922). Despite its short lifespan, the republic’s legacy was imprinted in the minds of local residents, leading to a sense of regional identity that clearly survived during the Soviet era, even as the notion of the Far East’s separation as an independent political body was out of the question.

Mikhail Gorbachev’s perestroika and the disintegration of the USSR sent great shock waves through the lives of all Russians, but the Far East likely suffered more than other regions. Its economic vitality largely depended on the central government’s continuous support—in the form of investment, which industrialized the region, and funds from the Defense Ministry, which allowed for the building of military ports and strongholds. Moscow also invested heavily in infrastructure and housing and offered much higher salaries to regional workers. When this support disappeared overnight, local residents were left to their own devices. To be fair, unemployment and non-payment of state wages were widespread across the country in the 1990s, but in the Far East these issues were due to Moscow’s neglect, which led to the growing perception that the center treats the region like a colony, and to public mistrust of officials dispatched from Moscow for governing. To assert their independence, Far Eastern residents even voted for career criminals during elections, as long as they were local. Yevgeny Nazdratenko, who served as the elected governor of the Primorsky Territory from 1995 to 2001, was clearly connected with organized crime. The logic for this choice was clear: first, privatization was nothing but grand larceny in the view of the majority of Russians; second, any so-called “legitimate” bureaucrat was perceived as a criminal anyway; third, at least local criminals were “our boys,” who knew the region and could do something good for the locals.

Against this backdrop, the Far East’s alienation from Moscow increased, as did its interest in nearby Asian countries.

In the 1990s, travel from the Far East to the European parts of Russia decreased due to the high cost of tickets, and later, due to the growing irrelevance of European Russia, including Moscow, to the lives of the locals. At the same time, the Far East’s contacts with nearby Japan and, even more so, with China expanded, with Chinese authorities facilitating this development. For instance, they made crossing the border quite easy and did their best to demonstrate friendliness toward Russians. And Russians reciprocated. It was reported that several Russian pensioners sold their houses and permanently moved to a nearby Chinese province.

Japan was the other magnet for Far East residents, especially for those in Vladivostok. When, in 2008, Moscow restricted imports of second-hand Japanese cars to Russia, mass protests ensued in the region. The Kremlin did not trust the local law enforcement and sent riot police from the European heartland to crack down on the protesters, who were badly beaten, leading to even more outrage. Again, the sense of isolation from and even hostility toward Moscow grew considerably. Some protesters displayed posters saying “Give Vladivostok to Japan”; others carried pictures of tigers (the symbol of the Far East) fighting with bears (the symbol of Russia). Angry calls for blowing up the Trans-Siberian Railroad were posted online. Violence eventually ensued. In 2010, a group of youngsters known as the “Primorsky guerrillas” (Primorskie partizany), presenting themselves as an armed civilian resistance to the oppressive representatives of the central government, engaged in a series of unprecedented murders of law enforcement officials. It took the authorities several months, hundreds of riot police officers, several tanks and helicopters to hunt them down.

Given this history, the 2020 protests against the dismissal of the popular Khabarovsk governor Sergei Furgal should have come as no surprise.

Attempt to find a solution: the Chinese option

All of this—the Far East’s attraction to a rising China and prosperous Japan, as well as deep distrust of the central government—was taken into account by the Kremlin elite, who understand the political implications of the region’s alienation. The Kremlin realizes that sheer force is not enough to solve the problem, so several steps were taken to prevent the Far East from seceding—for instance, in the case of a power succession crisis.

First, the Kremlin introduced lower prices for air and train travel to encourage communication between Far Easterners and European Russia and forge a sense of unity. This apparently did little to solve the problem, so the Kremlin inferred that economic development would be key to keeping the notorious region within Russia. Since Russian oligarchs were not keen on massive investments in the Far East, plans were made to bring in Chinese money. During his presidency, Dmitry Medvedev supposedly clinched an agreement with China to invest in a variety of Far Eastern projects. Chinese businesses welcomed the opportunity to get access to the Far East’s and Siberia’s raw materials—mostly timber, but it was harvested mostly by Russians, while little investment, if any, went into mines, roads, factories, or housing that could have improved the region’s economic health.

Other problems, too, hindered Chinese involvement. One of them was China’s proclivity for bringing in its own workforces on long-term projects (such as mining) and creating insulated colonies on foreign soil. A Chinese workforce is usually industrious and cheap; it is also usually disciplined, patriotic, and easily managed. While such arrangements exist in Africa, they are impossible in the Russian Far East. The Kremlin, and possibly a considerable segment of the Russian population, especially in European parts, fear Chinese expansion, or “infiltration,” as they see it. The fear is that a “Chinaized” enclave would create an impetus for the Chinese government to intervene in the region and annex it.

Thus, as hopes for massive foreign investment declined, the Kremlin apparently looked to old history books to find another solution.

At the turn of the 20th century, a considerable flow of mostly Russian peasants into the outskirts of the empire, including the Far East, was encouraged by then-Prime Minister Peter Stolypin, who viewed such migrations as the way to reduce tensions in European Russia, where peasants clamored for landlords’ land.

In the past, millions of Europeans emigrated to North and South America, as well as to Australia and South Africa, where the promise of free or cheap land was one of the major incentives for relocation. Possibly inspired by their example, Stolypin put forward the “Far Eastern hectare” project, which envisioned that any Russian citizen could receive a piece of land in the Far East free of charge. In 2017, the Kremlin tried to replicate the idea, but the project has failed from the start. The major difference with Stolypin’s project was the fact that past migrants were mostly farmers who regarded working a far distant land as an acceptable career. This is hardly the case with the present-day Russian population, which is mostly urban. In addition, the current amount of land granted is limited and removed from major population centers, thus making the offer attractive to a very small number of people.

The recent proposal made by the Russian president in September for massive investment in the Far East is also most likely dead on arrival and will soon be forgotten. The problem is that development of the Far East and similar areas cannot be done on the basis of private funding. Private companies could develop certain mineral resource areas with limited personnel, but they would expect visible profits in the not-so-distant future. Russian gas and oil companies have already ventured into Siberia’s most difficult terrain, but they are incentivized by the promise of profit, not grand geopolitical plans, which would benefit the country only in the long run.

This is not just Russia’s problem. Vast areas in Canada, Australia, and some other countries remain practically empty, simply because local businesses have no interest in developing them beyond what is needed for extracting natural resources. In the past, the Russian Far East had been developed mostly through direct investment by the Soviet government, which was not concerned with immediate profits and was thinking about the long-term economic interests of the country and, of course, geopolitics.

While Russia is hardly unique in grappling with the barren spaces of the hinterlands, it clearly has a geopolitical problem that sets it apart from other countries. Canada, for example, doesn’t have to contend with other powers that could potentially lure its empty regions out of Canada’s orbit. The story in the Far East is different: This region is close to countries that are increasingly more developed and richer than the Russian Federation. And they could pull the Far East away from the Russian Federation, especially if Moscow gets bogged down by an acute political crisis.

From: Analysis-Institute of Modern Russia