Join me in welcoming Delin Colón to Highlighted Author.

Delin Colón has a special affinity for research and non-fiction. She’s here this week to share two books, Rasputin: The Memoirs of His Secretary, which she translated and annotated, and Rasputin and The Jews: A Reversal of History.
Welcome, Delin. Please tell us about yourself and explain more about these amazing books. 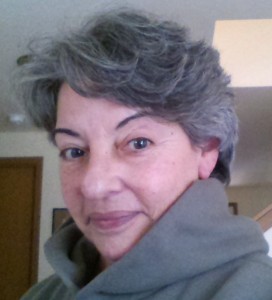 My name is Delin Colón. I am a freelance writer, editor and researcher with an undergraduate background in French and a post-graduate background in Clinical Psychology. I was raised in a small artists’ colony, about an hour from New York City, which no doubt sparked my interest in the many forms of art. But I was especially intrigued by the writers around me. I loved books, and the thought of spending the day alone in a room just putting words to my thoughts and imagination was very appealing, though admittedly odd for an eight year old. As a young adult, a few of my poems and articles were published in small journals. Over the course of my varied career(s), I’ve been: owner of a construction company; a Playboy Disco Bunny; a counselor in various psychiatric facilities; a freelance researcher; owner of an agency that paired writers with clients; a technical writer for Sociological Abstracts; and was once even offered a position as shepherdess on a large sheep ranch in the province of Québec.

My father had always told me that his great uncle was secretary to Rasputin in addition to being a diamond merchant. But it wasn’t until I was in my forties that I began researching him and found his published memoir in French. I spent a couple of years translating it, but before publishing, decided to research my ancestor’s claims of Rasputin’s aid to the oppressed. I found many sources to substantiate specific incidents. Rather than publish the English translation of the memoir, I first published my research (Rasputin and The Jews: A Reversal of History, April, 2011) demonstrating how Rasputin was demonized by the aristocracy for his progressive and egalitarian views on social and economic reform which would have deprived them of power. That book laid the historical groundwork – the context in which the memoir could be better understood. I subsequently spent a couple of years researching more about the people and events my great-great uncle wrote about in order to annotate, in my English translation (Rasputin: The Memoirs of His Secretary by Aron Simanovitch), background information and noting what was historical fact, gossip of the era or historical inaccuracy. All told, I’ve spent about fifteen years producing these two books, although I’ve edited books for other authors in that time, too.

Rasputin and The Jews: A Reversal of History
Buy Here
This book is a well-documented account of Rasputin as a healer, equal rights activist and man of God, and why he was so vilified by the aristocracy that their vicious rumors became accepted as history. For nearly a century, Grigory Rasputin, spiritual advisor to Russia’s last Tsar and Tsarina, has been unjustly maligned simply because history is written by the politically powerful and not by the common man. A wealth of evidence shows that Rasputin was discredited by a fanatically anti-Semitic Russian society, for advocating equal rights for the severely oppressed Jewish population, as well as for promoting peace in a pro-war era. Testimony by his friends and enemies, from all social strata, provides a picture of a spiritual man who hated bigotry, inequity and violence. The author is the great-great niece of Aron Simanovitch, Rasputin’s Jewish secretary.

What they’re saying:
“If you are interested in history or social justice, teach history, like to be challenged by new perspectives, or want to discover something many people don’t know but should, read “Rasputin and the Jews: A Reversal of History.””— Kate Brauning

Excerpt Introduction:
This small tome is intended to vindicate Grigory Efimovitch Rasputin (born approximately 1870; died 1916), spiritual advisor to the last Tsar and Tsarina of Russia. It means to debunk all of the outrageous rumors perpetrated by a bigoted, small-minded, self-absorbed society. If you are looking for a list his debauchery, sins, or crimes, you won’t find them here, for there exists no evidence of those, other than rumors. If you’re seeking the gory description of his brutal murder, you won’t find it here. And if you want to establish a link between Rasputin and the fall of the Romanov Empire, you won’t find any, because there is none.
What you will find is testimony from many who knew him, including his enemies, regarding his humanitarian activities. You will find accounts of his aid to the poor and the ill and his endless efforts to avoid war and its needless cost of lives. You will find substantial evidence of his aid to Russian Jewry and his attempts to obtain equal rights for this group, which was Russia’s most severely oppressed and restricted population.
But, most of all, you will find that what has passed as history for a century was not the truth, which exemplifies how history is written by the powerful not by the oppressed.

Get your copy of Rasputin and The Jews: A Reversal of History at Amazon Here

Rasputin: The Memoirs of His Secretary

Available and annotated for the first time in English, Aron Simanovitch’s memoirs offer an intimate view of Rasputin through the eyes of his dear friend and secretary. Simanovitch reveals Rasputin’s progressive ideas for social and economic reform that outraged the nobility. In the process, he paints a Peyton Place image of early twentieth century Petersburg society, with its gossip, plots and intrigue. But more importantly, his revelations about Rasputin’s humanitarianism lend a three-dimensional view to this controversial figure of Russian history.
Excerpt: Chapter 1

My Introduction to the Imperial Court
Allow me first to say a few words about myself: For more than 10 years, I occupied a position, in Petersburg, that one could certainly call ‘unique’. For the first time in Russian history, a simple Jew from the provinces was received by the Royal Court and had some influence over affairs of state. The upper classes of that time posed no serious obstacle despite their profound anti-Semitism. They sought my advice and assistance even though I was a Jew; however, most of my activities consisted of trying to aid my oppressed people, and lighten their load.
My success in Petersburg has generally been attributed to my bond of friendship with Rasputin. It has been said that it was Rasputin who cleared the way for my introduction to the Imperial Court. This is not exactly true. My friendship with Rasputin was certainly very precious to me, but the truth is that I had established connections with Petersburg society before Rasputin arrived in that city. And this is how I did so:

I was an established jeweler in Kiev and knew many influential people. Living in the provinces, I acquired a lot of experience in dealing with the police and other bureaucrats. I became adept at the art of manipulating these state officials. However, life for all Jews in Kiev, meant tolerating all sorts of vexations and humiliations. So, in 1902, I moved to Petersburg, temporarily leaving my family in Kiev to manage my thriving business. In Petersburg, I often met people for whom I previously had performed important services. Most had not forgotten my assistance and remained ready to oblige by helping me to get established in the city. Due to several among them, I was later able to escape certain death, as well as save the lives of my children.

In 1905, at the first worrisome reports of a pogrom in Kiev,[1] I hurried back to join my family. My stores had been ransacked. My business managers and many of my relatives had been massacred. My own life and that of my immediate family were in grave danger. But General Mavrin[2], who led the pogrom, and Zichotzki, the police prefect, took us under their protection and, thanks to them, my family and I escaped to Berlin.[3] As we were leaving Kiev, in front of the synagogue, we saw the corpses of Jews massacred during their holy service. This horrible spectacle left such an indelible impression that, after arriving in Berlin, it took me some time to recover. It was then that I firmly resolved to engage in the struggle, using any and all means, to defend the lives and rights of myself, my family and my fellow Jews. I decided to actively support the causes and interests of my people. Only now, and for the first time, am I making a public report of what I attempted and accomplished, taking full responsibility for my actions, and ready to accept any attacks or accusations.

My wife was from a family of Jewish entrepreneurs who were builders. They were serious workers and businessmen. Many of her relatives were artisans in Petersburg, with the support[4] of Count Witte.[5] They congratulated me when I established my first business relations there. Some of them occasionally received work orders from the Imperial Court. But just the same, they led a modest life and didn’t mix with high society. I, on the other hand, was a completely different kind of man. I eagerly and assiduously frequented the circles of little theaters, cabarets, and the races where I met people from the most diverse social strata. As everyone knows, the passion for gambling is a force that puts people at ease with each other, causing them to overlook social and national differences. The search for pleasure renders us, its prey, amiable in social relations. I quickly learned my way around this world and developed my client list from the acquaintances I made.

Thanks to my facility for creating amicable relationships despite social differences, I soon made contact with many members of the Imperial Court and interested them in doing business with me. In this fashion, my relations with them grew more intimate and I quickly learned, up close, the sort of lives the aristocracy lived. I arrived in Petersburg with business experience and a knowledge of life at just the right moment to help well-situated people who didn’t know how to obtain credit or buy and sell valuable objects. (Petersburg society was extraordinarily ignorant with regard to any sort of business affairs.)
______________________________________________
[1] In October, 1905, a hostile mob at Kiev City Hall blamed Jews for Russia’s ills and incited a pogrom, massacring 100 Jews, injuring 300 others, and destroying 20 to 30 million rubles worth of property, over three days, while authorities stood by and watched. Author Sholem Aleichem witnessed this event and recreated it in his novel In the Storm.
[2] General in the Imperial Russian Army who often carried out or instigated pogroms.
[3] Simanovitch, as part of his “art of manipulating and corrupting” officials, regularly paid those officials for protection.
[4] This ‘support’ would have been in the form of letters of introduction, business contacts, etc.
[5] Count Sergei Witte was Prime Minister from 1905-1906, also Finance Minister and served under Tsar Alexander III.

Get your copy of Rasputin: The Memoirs of His Secretary at Amazon Here

And here’s where you can find Delin:
Author website: The Real Rasputin http://therealrasputin.wordpress.com/