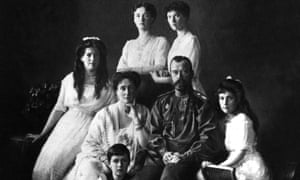 This May will see the release of Simon Sebag Montefiore’s The Romanovs: 1613-1918 in the United States. It is an exhaustive look at the full sweeping arc of Russia’s doomed royal family. The public has an insatiable appetite for the Romanovs, whether in the form of tiny animated bats or Orthodox saints or Pinterest boards swollen with sad, hand-colored photographs of worried children clustered around their parents’ chairs.

That Nicholas II and his family occupy such a prominent place in the American popular imagination has an obvious source: the immense popularity of Robert K Massie’s 1967 biography, Nicholas and Alexandra: An Intimate Account of the Last of the Romanovs and the Fall of Imperial Russia.

Written a decade before the remains of Nicholas, Alexandra and three of their children were exhumed from their hastily selected resting place underneath Koptyaki Road (Marie and Alexei’s bodies were found in 2007, a short distance away from the others), and two decades before the Yurovsky Note detailing their assassination and disposal was officially made public to western audiences, Massie was well-skilled in the art of the write-around. But what Nicholas and Alexandra lacks from a modern historiographical perspective it has always made up for with storytelling élan.

Fans of this book are many, and they can still remember stealing their mother’s book club copies and becoming entranced by the protagonists. Some can still identify the personality and appearance of each of the Romanov daughters (Olga: “shy and subdued”, Tatiana: “the tallest, slenderest and most elegant of the sisters”, Marie: “merry and flirtatious”, and Anastasia: “a short, dumpy blue-eyed child renowned in her family chiefly as a wag”). More can narrate the book’s mildly exaggerated account of the murder of Rasputin, and each admitted to an uncomfortable childhood obsession with their infamously sticky end in the cellar: dresses so heavily stuffed with gems that bayonets proved more useful than bullets to their assassins, a jeweled pillow used as a useless shield, the loyal servants who shared their fate.

Perhaps most poignantly, they remembered Nicholas II’s split-second realization that his family was not being moved to a more secure location, that this was the end, that there would be no ignoble exile to England.

The tragedy of the Romanovs has never merely been their final days at Yekaterinburg, of course, and if one had to to single out one aspect of Massie’s work for criticism, it might be the transformation of a truly inept and periodically malevolent Nicholas II into a sweet, gently bumbling young man who got in over his head. It is fair to say that Autocrat of All Russia has never been a good gig, nor an easy one, but Nicholas II was a disaster by any reasonable standards.

Massie omits, for example, Nicholas II’s quiet support for the anti-Semitic pogroms that swept Russia during his reign, including the Kishinev massacres of 1903 and 1905, overshadowed as they are by his soft, tentative letters to Alix. The “Nicky” of Nicholas and Alexandra is a husband and a father who is having a bad year at the office, the Nicholas II who presided over the disastrous Russo-Japanese war and watched more than three million doomed Russians trudge their way through nearly a thousand miles of snow to the fronts the first world war is of greater interest, perhaps, to history.

Nicholas and Alexandra, at its core, is a romance. Not just the love story of its titular characters, although Massie handles it beautifully (their letters are a delight), nor the love of a parent for a sick child, but also the end of a national romance: the Russians and the Romanovs. “It is very high up to God! It is very far to the Tsar!” Massie’s peasants say, and when the Bolsheviks arrive to finish the job, we have already watched wave after wave of delight, disillusionment, human error, and callous disregard rend that relationship beyond repair.

Perhaps the abrupt end of a monarchy is always a love story gone wrong: there are passages from Nicholas and Alexandra that could be lifted from any biography of Marie Antoinette or Louis XVI. Alexandra and Marie Antoinette shared a similar conviction that any anger from the peasantry could be instantly diffused if only the people could see their husbands’ faces. But that was a gambit that worked well until it didn’t.

The emotional fulcrum of Massie’s book, of course, is the brief, tragic life of the Tsarevich, Alexei. Every year, high school biology classes dutifully shade in circles in ancestry charts to depict the hemophilia that slowly worked its way down through the genes of Queen Victoria’s children and grandchildren, a task that remains in the imagination far longer than Mendel’s peas or the vagaries of fruit flies. The inability of the Romanovs to protect Alexei from his disease, despite their wealth and importance, and the lengths to which Alexandra, in particular, would go to save him, hitching her hopes to the cart of a wildly charismatic Siberian starets despite the disapproval of the royal base, gets top billing in its pages.

Meanwhile, the snuffed-out lives of Alexei’s sisters carry more than their own burden of the book’s pathos. (All of them died in that cellar; do not believe anyone who tells you that Anastasia survived.) Sisters were dutifully produced by Alexandra until a brother arrived, and photographs of their lovely selves dancing attendance on Alexei’s frail form are all that remain of them. Nicholas and Alexandra goes too far, I think, in implying that the Tsarevich’s illness was a major causative factor in the fall of the Romanovs, but it does seem to have bound the family into a single unit against the world, with a weak, hopelessly beloved child at the center of their orbit.

Massie’s gentle aside, referencing his own son’s hemophilia as a partial inspiration for his investigation into the tragedy of the Romanovs, has its own modern coda. Robert K Massie IV, now an Episcopal priest and a professor and a businessman and a politician and an important anti-apartheid activist, was infected with HIV, a fate he shared with the majority of American hemophiliacs in the late 70s and early 80s. Massie, however, ended up benefiting from a rare natural resistance to the virus, which has been a fruitful vein of study for researchers for the last few decades.

All that has very little to do with the Romanovs (nothing, really), and now a more rigorous study stands to eclipse Massie’s more personal page-turner.