I have previously written about Jacob Schiff, who provided the funding for Japan to defeat Russia in the Russo-Japanese War. This is about the Baron from Japan who sought to raise those funds. 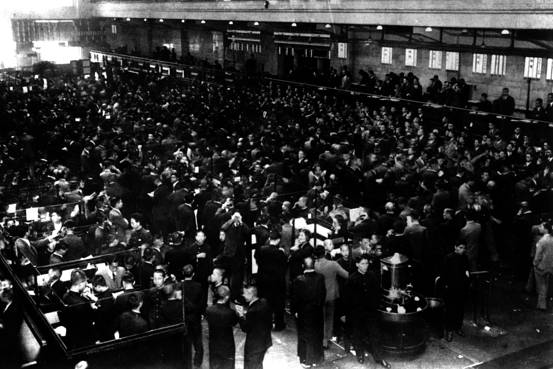 A view of the Tokyo Stock Exchange taken in 1932.

Long before Bank of Japan Gov. Haruhiko Kuroda tried to reflate the Japanese economy, Korekiyo Takahashi, a finance minister from the 1930s, took aggressive action that is often credited with pulling Japan out of the Great Depression.

Mr. Takahashi would eventually be assassinated for his policies, but his example still offers insight for today’s policy makers on how aggressively central banks should cross the line between monetary and fiscal policy.

Here are some excerpts from archived Wall Street Journal stories covering Japan’s first great reflationist from back in the day.

Mr. Takahashi joined the Bank of Japan in 1892 and served as its governor from 1911.  His first mention in the WSJ appears in an edition from Sept. 28, 1906 noting that the then BOJ vice governor was in New York “for the purpose of negotiating a new Japanese loan which, it is understood, will be about $125,000,000, to be placed here and in London, for the purpose of refunding some of the 6% Japanese war loans.” Japan had just won the Russo-Japanese War in 1905.

Mr. Takahashi would join the government in 1913 and would become known for embarking on monetary easing during his several stints as finance minister.

“Financial leaders of Japan, assembled at the bank of Japan at the request of Korekiyo Takahashi, finance minister, recommended measures which they thought likely to help Japan in its present difficulties. The three measures suggested were (1) inflation, (2) inflation and (3) inflation,” Burton Crane, a correspondent for The Wall Street Journal, wrote in an article published on April 1, 1932.

“The public uses the words ‘inflation’ and ‘deflation,’ but I dislike them,” Mr. Takahashi told the WSJ in an interview later that month. “Inflation is not a principle but a means. In Japan’s present condition the main requirement is that currency be in circulation sufficient for the normal needs of agriculture, trade and industry. Not enough for speculation but enough for what I call reasonable requirements. So-called inflation and deflation are good or bad only as they fit the circumstances. It is a question of administration. Too great a movement in one way or the other would be harmful,” he said.

Mr. Takahashi was briefly replaced by Sadanobu Fujii for a few months in 1934, but returned to serve as finance minister for a seventh and final time in November that year.

“Welcome accorded by Japan’s business community to Finance Minister Korekiyo Takahashi, who resumed his portfolio for the seventh time late in November, presented a notable paradox,” Mr. Crane wrote in December 1934. “Business has been complaining for about two years that the Takahashi fiscal policies were suicidal, that some steps would have to be taken to reduce the budget deficit. But plans of Finance Minister Sadanobu Fujii sent the stock market into a tailspin. Now that Mr. Takahashi is back at the helm, business takes for granted that tax increases will be of minor importance, that no governmental monkey business will be allowed to interfere with the prosperity of industry. Stocks have risen.”

But the tides quickly changed for the finance minister as he began taking steps to prevent overheating of the economy. In an article titled “Japan Debt Rise Halts War Plans,” published in February 1935, Mr. Crane wrote that Mr. Takahashi had become a “favorite object of attack.”

“As this is written, the Imperial Diet is in session and almost every day sees a new interpellation directed against the aged statesman. He is charged with being too free and easy in his attitude toward the national debt, with being too careless of the Empire’s financial structure.”

“This does not mean that the interpellators would act differently were they in his shoes. It merely means that they wish he would demonstrate the courage which they haven’t got and call a spade a spade. Mr. Takahashi was severely criticized both by the press and the politicians for suggesting that Japanese should spend less in Manchukuo in order to preserve the valuta. For Japan the financial facts of life were not pleasant. The critics merely followed the world-wide habit of blaming the carrier of bad tidings, not the one who made them bad,” he wrote.

Mr. Takahashi was murdered a year later by military officers irritated by his decision to cut spending, including funding for the imperial army’s expanding China incursion. Inflation soared in Japan following his death.

Follow this link for the complete text of the article published on Dec. 21, 1934, when Mr.Takahashi was appointed finance minister for the seventh time.