The Russo-Japanese War was prompted by Japanese attack on Port Arthur, which was provoked by Russian violation of a treaty 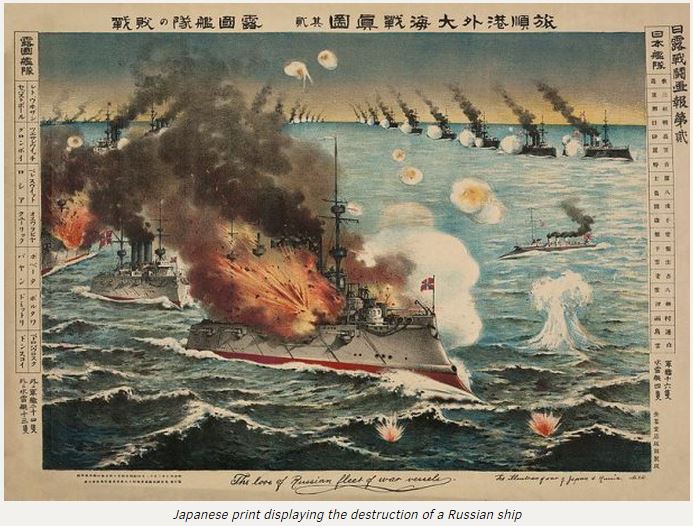 The Battle of Port Arthur began on February 8th, 1904.

Anticipating the events of thirty-six years later, the Japanese launched a sudden, surprise attack on the Russian naval base of Port Arthur on the coast of Manchuria without the formality of declaring war. At dead of night Japanese destroyers found the Russian Pacific Fleet at anchor in the outer harbour, peacefully asleep with its lights on. They fired their torpedoes and hit two Russian battleships, the Tsarevich and the Retvizan, and the cruiser Pallada. When day came, Japanese battleships shelled the Russian warships, which had retreated into the protection of their shore batteries. On the same day a Japanese army took control of Seoul, the capital of Korea, and on the 10th, Japan declared war. The Russians naturally complained at the breach of internationally accepted rules, but opinion in Britain generally favoured ‘Gallant Little Japan’ and in London The Times pronounced that ‘The Japanese Navy has opened the war by an act of daring which is destined to take a place of honour in naval annals.’

The war was caused by competing Russian and Japanese ambitions in the Far East, where the Chinese empire was disintegrating. The Russians had built the Trans-Siberian Railway from Moscow to Vladivostok across Manchuria and had bullied the Chinese into leasing them the ice-free port of Port Arthur as a naval base. The Japanese were prepared to accept Russian domination of Manchuria in return for a free hand in Korea, but the Russian government, which privately dismissed the Japanese with contempt as ‘monkeys’ and wanted to control both Manchuria and Korea, declined the bargain. The Russians were confident of winning any war easily and elements in the regime welcomed the prospect of a war as a way of rallying patriotic feeling behind Tsar Nicholas II (as at first it did). The Japanese broke off negotiations on February 6th.

With the Russian fleet bottled up in Port Arthur and Japan in command of the China Sea, the Japanese overran Korea and invaded Manchuria in force. The Japanese Third Army under Nogi Maresuke, a general steeped in samurai traditions, laid siege to Port Arthur itself. The war was fought with heavy loss of life and notable courage and chivalry on both sides. In October the Russian Baltic Fleet set sail on a journey half way round the globe to the Far East. On their way across the North Sea, the Russian ships came across some English trawlers from Hull, out fishing off the Dogger Bank. Nervously mistaking them for Japanese torpedo-boats in disguise, the Russians opened fire, sinking one of them, killing two men, almost starting a war with Britain and eventually having to pay compensation.

Port Arthur surrendered in January 1905, setting off an explosion of protest in Russia against the whole Tsarist system. The British denied passage through the Suez Canal and when the Russian Baltic Fleet struggled round the Cape of Good Hope to reach the China Sea at last in May, it ran into Admiral Togo, who was waiting for it in the Tsushima Straits and blew it to pieces. Better generalship and shorter supply lines won the land war for Japan as well and peace was eventually signed in September. It was the first defeat of a Western power by an Asian one since the days of the Mongol empire.

Richard Connaughton on the need to re-evaluate an over-looked conflict of the early 20th century.